1.  All competitive runners must have an England Athletics (EA) affiliation. If they are a member of a triathlon club (Craven Energy or LBT) they should be affiliated to British Triathlon Federation (BTF) or EA.

2.  All club runners need to pre-register their details with their club reps who will send them onto Dave Butler no later than the Friday evening before that Sunday’s race.  Anyone who misses the cut-off will only be allowed to run as a guest - see point 3 below.

3.  We will allow up to 10 guest runners per race on a first-come-first-served basis. They must pay a £3 fee per race before they will be issued with a guest runner race number. Their score will not count towards any team awards, individual awards or an attendance count. Once the race is over they should dispose of the race number as it is only valid for that race.

4.  Any runner found to be wearing an invalid race number or a DIY race number as they cross the finish line will have their points and their race attendance count deducted.  If anyone has forgotten to bring their race number with them we are happy to provide a replacement race number but there will be a £3 fee to pay.  They must dispose of their old race number and use the new replacement number for any subsequent races.

5.  All club runners are strongly encouraged to wear their club vests or T-shirts. It encourages team spirit, competitiveness between the clubs during the races and assists us if we have to identify runners.  We have stopped short of disqualifying runners for this season as it’s difficult to enforce and seems stern punishment for a minor infringement, but we may enforce this rule in future seasons.

Posted by Steve Boyer at 6:15 am No comments: 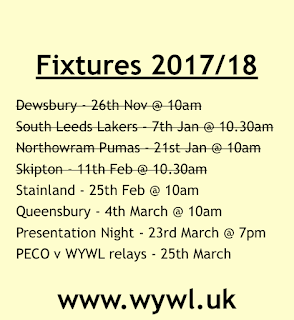 Posted by Steve Boyer at 5:06 am No comments: